Canada’s housing market will return to ‘balance’ in 2023, Re/Max forecasts

Article created and published by Craig Lord, Global News CA.
After the “frenzy” of 2021 and a “big peak and valley” in 2022, the president of Re/Max Canada tells Global News that next year could see “balance” return to the national housing market.
But Christopher Alexander says how high the Bank of Canada drives interest rates, and when it pauses or returns to more normal steps in its policy rate, will determine when homebuyers and sellers alike feel comfortable getting back into the market.
“That’s the big wild card,” he says.

Prices to rise outside most expensive markets: Re/Max

Re/Max’s 2023 housing market outlook released on Tuesday projects home prices in Canada will drop an average of 3.3 per cent from the average sale seen in 2022.
Despite relative stability in prices on a national scale, on a regional basis, Ontario and western parts of Canada are set to see further drops, according to the brokerage’s forecast.
Some cities in Ontario are especially vulnerable, Re/Max projects, with steeper price drops expected for the Greater Toronto Area (11.8 per cent lower), Barrie (15 per cent lower) and Durham (10 per cent lower).
Parts of British Columbia are also expected to see declines, such as Greater Vancouver (five per cent lower), Kelowna (down 10 per cent) and Nanaimo (also down 10 per cent).
But parts of Atlantic Canada and Alberta are set for growth in 2023, Re/Max expects.
Calgary is set to see prices rise seven per cent, for example, while average sale prices in Halifax could jump up eight per cent next year, its forecast said. 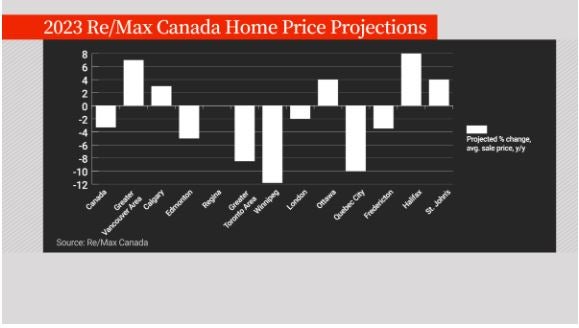 Alexander tells Global News that these markets are benefiting as relatively affordable destinations for those priced out of Ontario and B.C.
Halifax has a “metropolitan feel” without the prices of Toronto or Vancouver, he explains.
Calgary, after many years of downward pressure on prices, has had “huge benefit” from inter-provincial migration during the pandemic, Alexander says.
“The average sale price is less than half of Ontario. … You’ve got the Rocky Mountains within an hour and a half of the city. It just offers so, so much,” he says.
“I think Calgary is going to continue to thrive because of all of those reasons.”

When is housing activity expected to pick back up?

Most markets that Re/Max has pegged for a price decrease are also expected to see a slowdown in sales activity year-over-year.
Most housing markets in the country saw a pronounced slowdown starting in the spring of 2022 as the Bank of Canada raised interest rates.
October’s real estate figures showed a “slight uptick in sales” compared to the previous month, Alexander notes, but it’s too early to say whether this marks the end of the cooling period.
Both buyers and sellers have been waiting on the sidelines to see where the Bank of Canada’s policy rate will land and how prices will react, Alexander says, but he argues that this phenomenon can’t last forever.
“On both the buy and sell side, you’re going to reach a point of. I can’t wait anymore,” he says.
“People have babies, they get married, they get divorced and life happens. And so that can cause people to come off of the sidelines.”
The other thing that Re/Max expects to drive activity back up next year will be the eventual peak of the central bank’s current rate hike cycle.
Buyers especially will feel more confident when they see the Bank of Canada either pause rate hikes or return to more normalized, quarter-percentage-point steps, Alexander says.
“I think you’re going to see buyers take advantage of that in a big way.”
But no one knows how high the Bank of Canada will eventually take interest rates, and Alexander acknowledges that overtightening could push back the recovery of the housing market and lead to “further adjustments” in price.
He adds he’s optimistic that the Bank of Canada will be cautious in its approach and try to avoid pushing the country into a recession.
Buyers itching to get back into the house hunt might not have to wait for that clarity from the central bank to get a good deal on a home, Alexander notes.
There’s “a lot less of a frenzy” now than even this past spring, he says, with the ability to put conditions and take time to make decisions before leaping into the market.
“You’ve got choice now as a buyer,” Alexander says. “So if the timing is right for you and you can buy something that’s within your means and you’re not overextending yourself, go for it. It’s a great time right now.”